Each week, we’ll tell you what to expect, what to keep an eye on, and where and when you can catch the Nittany Lions on fall Saturdays this season.

Weather forecast (via AccuWeather): High of 75 degrees, with sun and some clouds.

Overview: Penn State football returns to Happy Valley. Although there are many compelling storylines for this year’s Nittany Lions, the real story is that football is back. How will Sean Clifford fare in his first career start? What will the running back rotation look like? On the other side of the ball, just how dominant can the defense be this year? We’ll get a first look at a clearly overmatched opponent that shouldn’t push Penn State too much. Make the necessary plays and stay healthy. That’s this weekend’s game plan for the Nittany Lions.

Penn State wins if: the Blue Buses find their way to the stadium.

Idaho wins if: We could try to concoct a maze of “this, then that,” scenarios, though we’ll give our readers the benefit of knowing better. Idaho, an FCS opponent, isn’t winning Saturday.

Count on: a feel-good vibe all day long. With a mid-afternoon kick and a gorgeous forecast, fans have plenty to look forward to: tailgating, watching (what should be) a comfortable win, and enjoying a wonderful weekend in Happy Valley.

Keep an eye on: Will Levis. Even though Sean Clifford was named the starter (as expected), Saturday’s contest shouldn’t be close in the second half. Maybe James Franklin keeps Clifford in the majority of the game so he can build up game reps, though it wouldn’t be surprising if Levis leads at least a couple of drives. So, both quarterbacks might have a chance to show off their arm in the season opener.

Trivia tidbit: Penn State is one of only two teams in the country who have recorded at least 14 consecutive winning seasons, and also been ranked in the AP poll for the last 40-plus weeks. The other team? Oklahoma. 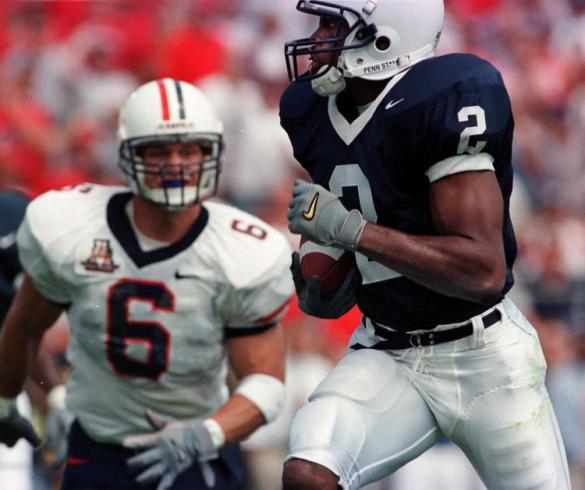 Chafie Fields’ energy changed on the way to the stadium.

Fields, one of Penn State’s most accomplished wide receivers, says he always tried to avoid all the pageantry that overtook campus and the community leading up to a big game for the Nittany Lions.

The 1999 season opener against Arizona certainly qualified for that category, and Fields took the same approach as the Nittany Lions prepared to host the Wildcats in a matchup of Top-5 teams at Beaver Stadium. In the first-ever (and only) battle between the squads, Penn State and Arizona each entered the game ranked either third or fourth in the two major polls at the time.

Personally, Fields began the season highly motivated, determined to prove he was an elite wideout with explosive playmaking ability. Still, even with ESPN’s College GameDay in town and the college football world centered on State College, Fields saw the contest against Arizona as “just another week for me.”

That was one of many lessons he learned from Joe Paterno: Don’t get caught up in the attention, or as Fields described, “stay out of the lights.”

Though when Saturday morning rolled around, the mood in the air shifted, and Fields noticed. He saw the outpouring of support, and he felt the energy. Sensed it. Saw it. Knew that Happy Valley was about to be rocking, perhaps had been rocking all week.

As the fleet of Blue Buses pulled away from the team hotel and motored toward Beaver Stadium, there was no longer denying that the upcoming contest against Arizona was significant.

A senior standout for the ’99 squad, he scored two touchdowns within the game’s first six minutes in spectacular fashion. First, he caught a 37-yard scoring toss from Kevin Thompson on the game’s opening drive, “twisted away from one defender and outran the rest to the corner of the end zone,” as John Black ’62 wrote in The Football Letter.

The next time the Nittany Lions possessed the ball, Fields raced 70 yards on an inside reverse. As Black explained, Fields made a perfect cut over left tackle, and then ran down the middle of the field for the second score.

“And the rout was on,” Black summarized correctly.

At the time, the third-largest crowd in Beaver Stadium history (97,168) watched Penn State dispatch its West Coast opponent 41-7 in a game that was as much of a blowout as the score indicated: The Nittany Lions led 31-0 at halftime and 41-0 after the third quarter.

It should be noted here: Any story about Fields and 1999 needs to include that a few weeks following the blowout over Arizona, he caught one of the most memorable touchdown passes in Penn State football history: Fields corralled a 79-yard score in the waning minutes to catapult the Nittany Lions past Miami for a road victory over the eighth-ranked Hurricanes (Penn State was ranked third). The highlight prompted a memorable call from legendary play-by-play announcer Fran Fisher, who as Fields crossed the goal line, belted with enthusiasm:

Fields finished the game against Miami with 177 receiving yards, seventh-best all-time in program history for a single contest. For his career, Fields totaled 88 catches for 1,437 yards, prolific enough to place Fields in the Top 20 all time at Penn State.

Rankings aside with respect to this week’s opponent, a similar situation to the 1999 opener awaits the Nittany Lions on Saturday, with Penn State hosting a first-time opponent that hails from the west.

Penn State and Idaho are set for a 3:30 p.m. kickoff at Beaver Stadium, site of what should be a picturesque backdrop for Labor Day weekend in Happy Valley.

Fields earned a B.S in 1999 from the College of Health and Human Development, and he’s now an accomplished sports agent who’s represented many Penn State lettermen. Anytime he can work with a Penn Stater, “it’s a lot more personal,” he says, and he plans to cheer on the Nittany Lions this season.

That’ll always be true for Fields, a self-described “Penn State loyalist” who hopes to see the Nittany Lions win out and compete in the College Football Playoff. Either way, he’s standing by and ready if he’s ever called upon to serve the team.

“Anything that I can do to support the program, I’ll do,” Fields said. “I’ll be one of the biggest fans. I’ll be rooting for Penn State all year, I’m always going to.” 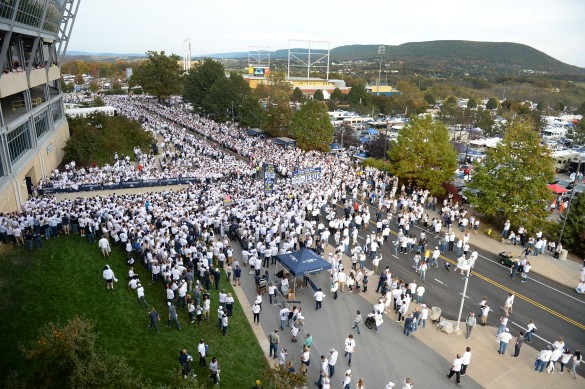 This weekend, tens of thousands of alumni and fans will return to State College, rekindling a lifelong love affair with Penn State. If you’re among the many who are embarking upon the annual fall pilgrimage to Happy Valley, chances are you’ll notice some changes upon arrival.

Construction is ongoing at Willard Building for the state-of-the-art Donald P. Bellisario Media Center, and you can check out picturesque views of Sparks and West Halls from the newly renovated Collaboration Commons in Pattee Library. These remodeled areas have the aim to enhance the student experience, an admirable goal that’s always at the forefront of University administrators’ minds.

The Diner is gone — quite literally — as development has already begun on its replacement, a fast-casual restaurant chain. And if you’re looking to order some wings at The Darkhorse Tavern, well, you’ll have a surprise waiting for you.

These are just a few examples.

However, there’s one thing you can always count on when you come into town for the season opener.

As you stroll across campus or head downtown, the crisp fall-like weather smacks your senses and leaves no doubt: Penn State football has returned to Happy Valley.

That’s the beauty of September (or in this case, August) in Central Pennsylvania.

The town takes on a life of its own and the familiar energy swirls around State College, as the season’s first kickoff awaits on the horizon.

Football, of course, is the reason for alumni and fans descending upon University Park this weekend, as the chase for another 10-win campaign and Big Ten championship begins for James Franklin and the Nittany Lions.

The on-field success is one reason for so much excitement surrounding the upcoming season. Additionally, what makes Penn State football special for so many goes way beyond what happens on the gridiron.

Tailgating. The Blue Band. Stopping by the Nittany Lion Shrine for a photo with family and friends. Each home game weekend is a throwback to your college days, an opportunity to transport yourself back to a time when Dear Old State molded you when you stood at childhood’s gate.

We understand that passion, because we feel the same way.

With The Football Letter blog, we strive to deliver stories and photos that showcase the high level of devotion that Penn State graduates have for their alma mater. If you haven’t already, subscribe to the blog (enter your email address in the box in the lower right-hand corner) and follow us on Twitter, as we’ll highlight the many reasons that distinguish Penn State as one of the premier college football programs in the country.

Or, in Bill O’Brien’s words, why Penn State is “college football heaven.” 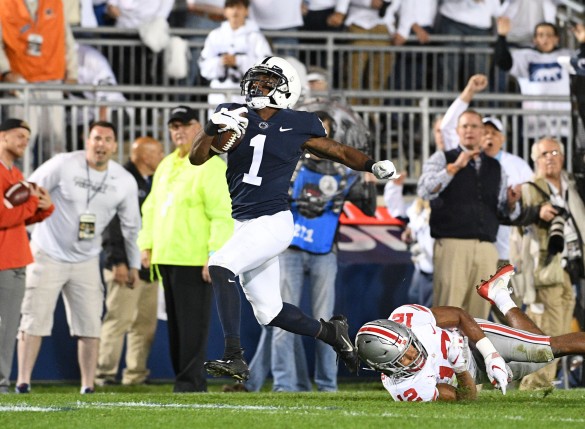 Throughout the season, we’ll feature lettermen, speak with players and coaches, and dig into our extensive archives. We’ll also talk with Steve Manuel ’84, ’92g, longtime distinguished photographer for The Football Letter, as he looks back on some of his most memorable photos.

There’s a lot to savor, and we’re looking forward to sharing another season with our readers.

So, if you’re in town this weekend, we invite you to take your time and soak up all the sights, sounds, and smells that elevate State College into the quintessential college town in America.

There really is no place in the world like Happy Valley in the fall.