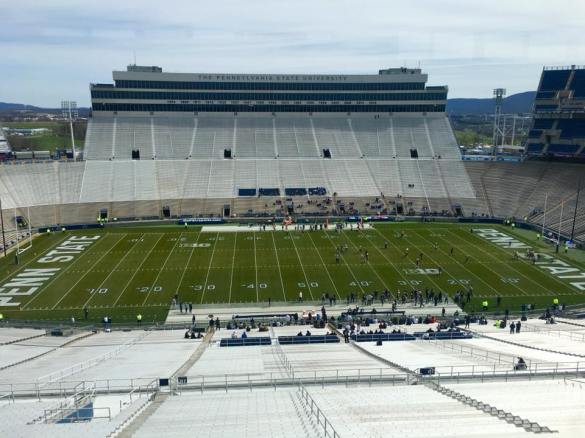 Fans will have to wait until at least the spring to see their Nittany Lions play at Beaver Stadium, as Penn State prepares for a fall unlike any other in history. Photo by John Patishnock

That probably sounds like a strange way to start a column, though it’s something that I think of constantly. I’m also reminded of this on my daily run around the University Park campus. I grew up in the area, graduated from Penn State, and have plenty of memories of Beaver Stadium, both as a fan while growing up and also covering the team.

Since moving back to State College, I’ve spent the last seven years living in College Heights, right next to campus.

I’ve been a runner for a long time now, going back to my undergraduate days, and my current routine takes me up a few blocks along Atherton Street, where I cross at Park Avenue, and then run the entire length of Curtain Road.

I pass by the Nittany Lion Shrine, University Libraries (Pattee-Paterno), Palmer Museum of Art, and the Berkey Creamery. I keep going until I hit the T-intersection where Beaver Stadium intersects with Medlar Field at Lubrano Park, head to University Drive along Park, and then double back.

Many Penn Staters are able to return to campus only a few times a year. Usually during highly popular events such as the Blue-White Game, Arts Fest, Homecoming, and the seven home football games.

In many ways, this is a lost year for alumni and friends, though I don’t see it entirely that way. Of course, it’s easy for me to say that. Again, I’m spoiled. I have the opportunity to work for my alma mater and see the aforementioned legendary campus landmarks nearly every day.

With the Big Ten football season (and all fall sports) now officially canceled — the conference will regroup and see if the teams can pull off a spring season — Penn State faces a fall unlike anything we’ve ever experienced before.

Chances are pretty good the next four-plus months will go by slowly. Campus will probably have something of an eerie feeling at times. As a runner, sometimes it’s nice to feel like I have campus to myself, though I undoubtably miss the buzz that students and visitors create when they swarm back to Happy Valley.

While looking ahead, there are already a few things I believe I’ll remember from this year. And perhaps future generations will benefit, too. Anytime something seismic comes along that fundamentally shifts the way people live and work, and I think a global pandemic counts, changes are bound to happen.

One last thing I’ll remember: Never take anything for granted. Before this year, I knew I could always count on covering Penn State football in the fall, seeing hundreds of thousands of alumni and fans return to their collegiate home, and see campus come alive again after a laid-back summer.

So when Penn State football returns in 2021, I’ll savor it even more. Until then, I’ll settle for the welcoming views on my daily runs.