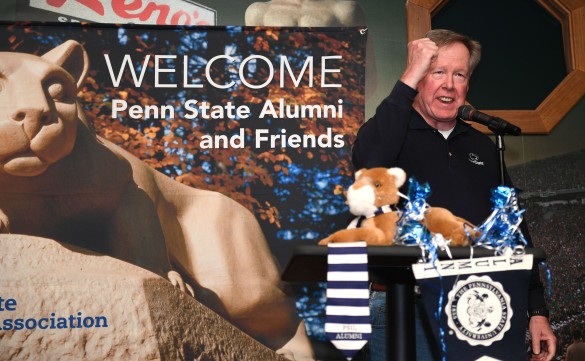 Not much has changed for Gary Wade ’77 over the years. And that’s good.

“I’m involved for the same reasons I first got involved, it’s exciting,” Wade said. “I really enjoyed my years at Penn State. Studying was hard, there was a certain grind to get your degree, but there’s a certain joy to the Penn State community.

“You meet another person, and you’ve never met them before, and as soon as you have a common bond as Penn Staters, you enjoy sharing stories — even if they’re decades apart.”

Whether the stories revolve around studying at the library or attending a football game, “the thrills are the same over the years,” Wade said.

That consistency has served the chapter well, most notably through a core group of board members. The chapter successfully holds repeat events, like television watch parties, annual member socials, and student sendoff picnics, with Wade pointing out that things run more smoothly with minimal turnover.

One of the main contributors is Bob Veres ’74, the chapter’s treasurer, and as Wade describes, “sports guru.” Veres has been active with the chapter since the 1970s, securing football tickets for numerous games and overseeing various contests for the Michigan group.

Complementing these stalwarts, the chapter has expanded its efforts with the help of some personnel additions.

“We do have a couple of new people on board, and that’s made things a bit more exciting,” Wade said. “They’ve come in with ideas and made a few changes with what we do.”

For one example, Wade pointed to Brodie Schultz ’15, ’17g and his work toward organizing a THON golf outing each of the past few years. Schultz helped the chapter exceed its goal for each of the past two years with the golf event, raising more than $25,000 combined.

Additionally, the new members have increased the chapter’s presence on social media, and you can follow the Michigan Chapter on Facebook.

“They like Penn State, the networking, and the benefit of meeting up with Penn Staters in different fields and degrees,” Wade said. “They all have the common core value of wanting to help Penn State and wanting to help the chapter.”

Sometimes, these demographics merge: longstanding board members contributing to recent graduates getting involved.

The chapter has worked diligently with scholarship fundraising, awarding $13,000 last summer to nine students, and awarding more than $83,000 over the last decade. The scholarships benefit Penn State students hailing from Michigan, such as Alexandra Fahoome ’16, who received a scholarship in 2015. Fahoome returned to Michigan after graduating and now leads the Michigan Chapter’s communications efforts. 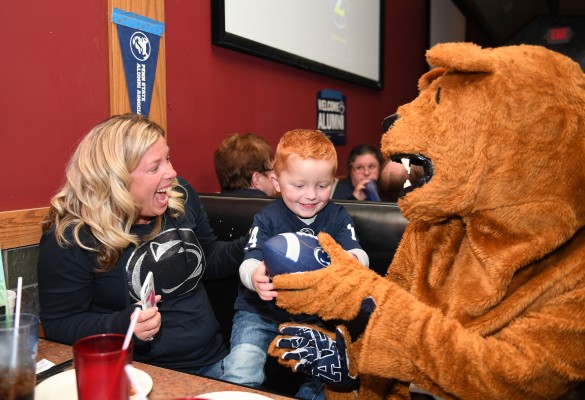 Wade and his group will be busy this weekend, when undefeated and No. 6 Penn State comes to East Lansing for a showdown against the Spartans.

Friday night, the chapter will host an alumni mixer at a local restaurant. Then, there’s a block of tickets available for members for the game. Kickoff is scheduled for 3:30 p.m. at Spartan Stadium.

The atmosphere Friday night is more manageable for alumni and friends to get photos and some face time with the cheer team and Nittany Lion, who typically headline each away game mixer that Alumni Association affiliate groups host. It’s a little less hectic, Wade said, and Penn Staters have the opportunity for some meaningful interaction.

Wade has a little more time for himself now, too. He retired last summer after 41 years at Chrysler, a job he landed out of college because of his Penn State degree. He was recruited by another Penn State grad, George Miller ’59. Miller is still involved with the Michigan Chapter, so Wade continues to see him on a regular basis

It’s those types of connections that have enriched Wade’s Penn State experience, one that transcends decades, geographic regions, and different perspectives from generation to generation.

“The Penn State community in Michigan and other places I’ve been, it’s a great community to be involved in,” Wade said.

There are nearly 300 Alumni Association affiliate groups, spanning geographic regions, academic colleges, and shared interests. You can view a full list and connect with Penn Staters anytime at alumni.psu.edu/groups.