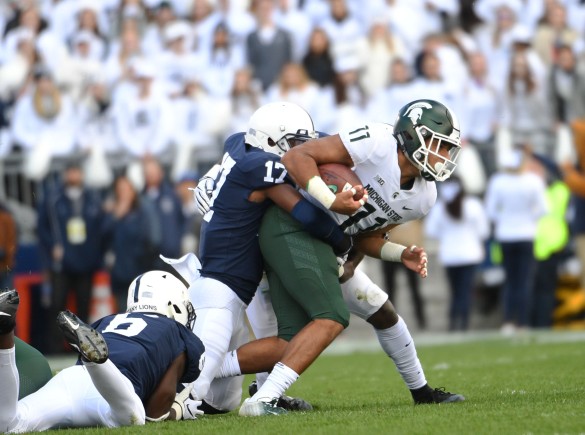 UNIVERSITY PARK — Each week, we’ll tell you what to expect, what to keep an eye on, and where and when you can catch the Nittany Lions on fall Saturdays this season.

Venue: Spartan Stadium, which features a capacity of 75,005.

Weather forecast (via AccuWeather): High of 54 degrees with some sunshine giving way to clouds and rain at times in the afternoon.

Throwback classic (2016): We’re sending it back only two years, to when Penn State demolished Michigan State 45-12 to win the Big Ten East Division title, before winning the conference championship a week later against Wisconsin in Indianapolis.

Overview: Penn State is 7-0 for the fifth time since joining the Big Ten, and while the Nittany Lions have created a ton of momentum the last few weeks (and really, the entire season), Saturday looms ahead. Michigan State has been outscored 72-10 in its last two games — losses to Ohio State and Wisconsin — and that stat actually makes the Spartans seem more dangerous. That’s how odd this game has been since James Franklin arrived in Happy Valley.

Penn State wins if: Sean Clifford continues to protect the ball. The first-year starter has thrown only two interceptions, and the home crowd will be thirsting for a win Saturday. It’s been almost a month since the Spartans’ last victory, a 40-31 win over Indiana on Sept. 28, and the same amount of time since Michigan State’s last home game. The atmosphere should be plenty rowdy, though won’t be anything Clifford hasn’t seen before. Protect the ball, and stay unbeaten: That’s the mantra Saturday for the superstar sophomore.

Michigan State wins if: the Spartans’ offensive line gives quarterback Brian Lewerke enough time to have downfield success. Penn State ranks fourth nationally in rush defense per game (66 yards), and Michigan State doesn’t appear to have the ground game to make it work Saturday. The Spartans average a respectable 117 yards per contest, though nothing that’ll shift the dynamic of the game. Unless a team can gain 200-plus yards against Penn State, and it doesn’t appear the Spartans have that potential, the air attack is the best bet. That’s what Michigan State will need Saturday.

Keep an eye on: Noah Cain (yes, we’re going with the true freshman running back again). Saturday will be a game when James Franklin might want to (have to?) divert from the running back rotation and go with a bruising back if the game turns into a contest of one grinding possession after another. Cain leads Penn State with 329 rushing yards and six touchdowns.

Trivia tidbit: Though Michigan State leads the overall series, Penn State is ahead 14-9 since joining the Big Ten.