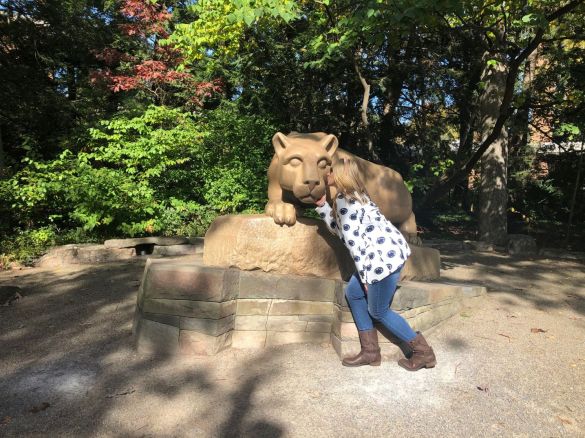 You could say that this weekend has been 15 years in the making for Emily Zuber.

Her story transcends football, or geographic regions, though everywhere along the line, Penn State has figured prominently in her story.

Let’s start at the beginning.

Zuber started visiting Penn State at an early age, the result of having four older sisters who all earned degrees from University Park. Zuber followed, graduating in 2004 from the College of the Liberal Arts, specializing in labor and industrial relations.

There’s a 19-year difference between Zuber and her oldest sister, though the five siblings always had (and always will) have the Penn State thread connecting them. After graduating, Zuber moved to Minnesota, following the path already taken by two of her sisters, and having that family foundation eased her transition to the Midwest.

Also helping with her post-grad move was finding fellow alumni. Penn State was/is such a big part of her life, and her sisters were already familiar with the Alumni Association’s Minnesota Chapter, offering a natural segue for Zuber. She attended a few meetings, helped the board with some events, and then she became an at-large member before elevating to the role of vice president in 2014. Two years later, she stepped into the president’s role, with her term ending next year.

The last few weeks have been particularly interesting for Zuber, building up to Saturday’s anticipated football game between No. 5 Penn State and No. 13 Minnesota. Both squads are 8-0, a mark that Minnesota hasn’t reached since 1941.

Zuber laughed while saying she was disappointed that ESPN’s wildly popular show, College GameDay, passed on broadcasting from Minneapolis — the crew will instead head to Tuscaloosa for a matchup between the country’s two top teams, Alabama and LSU —though there’s a serious undertone in what the game means not only to the football teams, but also to the Minnesota Chapter.

There’ll be a large influx of Penn Staters coming to town, and Zuber hopes that alumni and friends see they have a presence in the state year-round.

“I want them to know that the Penn State footprint is far and wide and very involved,” said Zuber, an IT business analyst. “We’re making sure that Minnesota knows who Penn State is and the good that we’re providing in the community.” 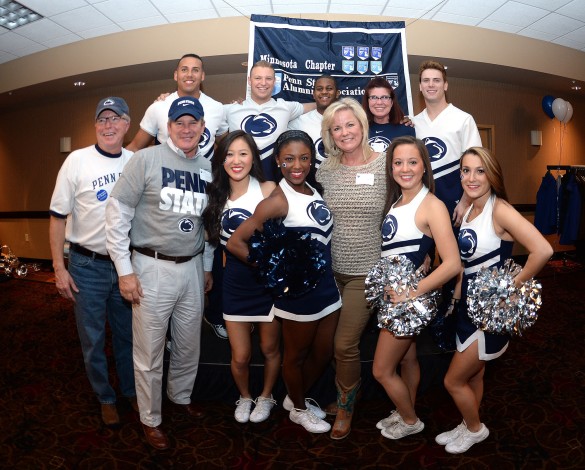 The Minnesota Chapter welcomed alumni and friends prior to the Nittany Lions’ battle against the Gophers in 2013. Photo credit: The Football Letter/Steve Manuel

This weekend represents a little bit of a Homecoming for Zuber, she said, with the chapter hosting a mixer Friday night. The event will feature the Pep Band, Penn State Cheerleaders, and Nittany Lion, with locals and visitors welcomed alike. There’s no fee to attend, with the chapter simply asking for donations for its scholarship fund; the scholarships are awarded to local students attending Penn State.

The scholarship fund continues to grow — now standing at more than $5,000 per year and recently awarded to two students — and Zuber proudly points out that’s just one way the chapter makes a difference, saying their impact goes beyond fundraising for their own school.

Group members annually volunteer at a local food bank, packaging boxes and stocking shelves, in addition to donating to help stop child abuse in Minnesota. The chapter also regularly supports THON through various events, with a focus on representing their alma mater with zest and devotion.

“We give back to the community, and we donate time and money,” Zuber said. “We’re making an impact in the overall Minnesota community, and it’s exciting to be a part of that. Penn State is doing that.”

People are recognizing the chapter’s impact, with the group partnering with Penn State legend Ki-Jana Carter, who now owns a marketing and merchandising company in Florida. Carter worked with the chapter on producing T-shirts, blankets, and bags, which will be available at the mixer Friday. Moyer’s Jeweler, meanwhile, donated a bracelet inspired by a Penn State alumna — she won a contest with her outstanding design — that’ll go toward the scholarship fundraiser.

These are just a few examples of the resourcefulness of the Minnesota Chapter, which is enjoying increased membership, resulting in 88 members and 77 households — the latter is just two off of the group’s all-time record. There’s concise and detailed information on the chapter’s website about the value in joining, along with some cool trivia.

There are over 1,800 Penn State alumni living in the state and Western Wisconsin, and there’s also a David Letterman-style Top 10 list outlining why Penn Staters should join the chapter.

For Zuber, the reasons are plentiful, and also personal. She began visiting University Park when she was 2 and attended her first football game at 3 years old. With four older siblings paving the way for her to become a Nittany Lion, you could easily make the argument she was born into the Penn State family.

And she doesn’t want to ever leave.

“It’s a part of who I am, and that’s a piece of me that I don’t ever want to lose,” Zuber said of her Penn State identity. “The connection, the tradition, it’s important.”

There are nearly 300 Alumni Association affiliate groups, spanning geographic regions, academic colleges, and shared interests. You can view a full list and connect with Penn Staters anytime at alumni.psu.edu/groups, and stay updated on the Minnesota Chapter by following the group on Facebook and Twitter.