Danny Connell is a hockey player, with all the passion and toughness that designation implies. He’s been on the ice since he was four. “It’s the love of his life,” his mother says.

This past summer, Danny was getting ready for a big step forward: At 14 and a freshman-to-be, he was going out for his high school team. Of course, that meant a comprehensive physical, of that sort that would be a formality for most kids. But his parents knew this was anything but for Danny: There was a family history of heart issues on his father’s side, including an uncle who died of an enlarged heart in his early 30s. It was a risk they had to take seriously.

“They did an EKG and a stress test, and at first, everything looked fine,” Nicole Connell said. “But then they did an echocardiogram, and the story totally changed.”

The Connell family was together in the doctor’s office when they got the news: END_OF_DOCUMENT_TOKEN_TO_BE_REPLACED 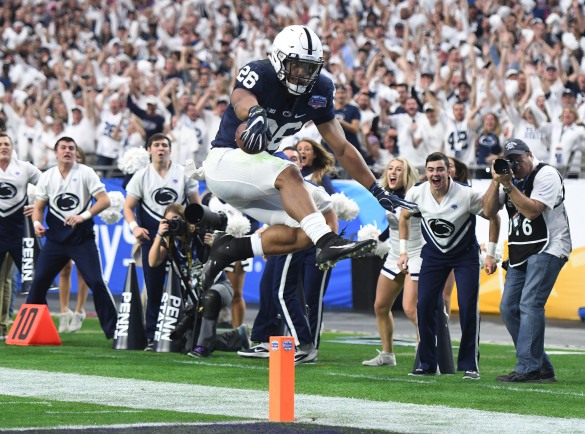 This season marks 80 years since Ridge Riley ’32 debuted The Football Letter as a way to keep far-flung Penn State alumni up to date with the week-to-week results of the Nittany Lion football team. It also marks a much more modest anniversary: Five years ago this week, we launched the online presence you’re reading now, expanding the Football Letter brand for the social media age.

While John Black ’62 gears up for his 43rd season as editor of the Football Letter, we thought it might be a good time to share some highlights from the blog. Here’s our pick of our five favorite stories from the past five years.

Like any father of a high school senior, Leonard Humphries knew he had to let his son make the college choice that was best for him—regardless of Humphries’ connection to his own alma mater.

“I wanted him to approach the process with an open mind, look at everything that’s out there and make a determination,” Humphries says. “He might not like the same things I like. What was good for me 30 years ago, I didn’t know if it was going to be good for him.”

And so, the senior Humphries insists, there was was no pressure. But there was hope. “I just hoped that he understood what I know about Penn State, and what a great university it is.”

We trust James Franklin will forgive us for lingering just a bit longer on last week’s unforgettable win at Iowa. Join us on this week’s podcast as we relive a crazy night in Iowa City, and, yes, look ahead to Indiana (Indiana, Indiana).

This week’s letterman guest is Tony Pittman ’95, a man whose claims to fame are many. A three-year letterwinner, Tony was a starter on the undefeated 1994 squad—a stat that ties into his own proud family connection to the Nittany Lion program: Tony is the son of Charlie Pittman ’70, an All-American running back on Penn State’s unbeaten 1968 and ’69 teams. Their unique claim to fame? Father and son went a combined 45-0-1 as starters in blue and white. They also collaborated on the 2007 book “Playing for Paterno,” which is loaded with great stories and insights. END_OF_DOCUMENT_TOKEN_TO_BE_REPLACED

We get ready for Big Ten play and catch up with one of the famed Penn State Collins brothers as the Nittany Lions hit the road for a big game in Iowa City.

Hailing from Cinnaminson, N.J., Jason Collins ’97 was a standout on the undefeated 1994 squad, END_OF_DOCUMENT_TOKEN_TO_BE_REPLACED

It’s Panthers on both sides on this week’s podcast, as we look back at a satisfying victory over old rival Pitt, and look ahead to this week’s visit from Georgia State.

We’ve got a great conversation with Anwar Phillips ’05, a standout in the secondary on the Nittany Lions’ mid-2000s teams, including that memorable run to the 2005 Big Ten championship, END_OF_DOCUMENT_TOKEN_TO_BE_REPLACED

Regardless of whether you call it a “rivalry” — those of us who are old enough certainly do — there’s a buzz in the air as Pitt makes its long-awaited return to Happy Valley. This week’s podcast is all about that in-state battle.

This week’s guest letterman is Bill Contz ’83, a starting lineman on the 1982 national championship team and author of the new book When the Lions Roared: Joe Paterno and One of College Football’s Greatest Teams. END_OF_DOCUMENT_TOKEN_TO_BE_REPLACED 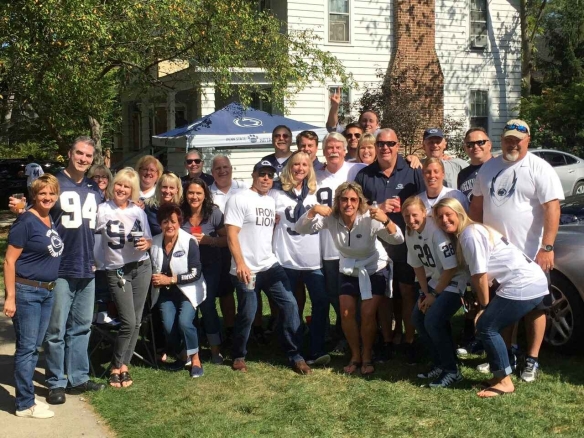 Organized, enthusiastic, and relentlessly dedicated, the Penn State Football Parents Association provides quiet but invaluable support for the Nittany Lions—and for each other.

The tradition started about a year ago, a few hours before last season’s game against Minnesota.

“Before every game, my wife gives our son a hug before the team goes into the stadium. So we’re there by the south entrance, and there’s Coach Franklin. Usually he’ll high-five a few people and shake hands with recruits, and we happened to be standing right there. So I just reached out with open arms and said, ‘Hey, Coach,’ and we gave each other a big hug and a kiss.”

If you remember how things turned out, you’ll understand why Buchholz’s pregame smooch and embrace became a weekly necessity. END_OF_DOCUMENT_TOKEN_TO_BE_REPLACED

Football season is (finally) here, and our first game-week episode of the Football Letter Podcast is ready to go.

This week, we catch up with Football Letterman’s Club director and former Nittany Lion quarterback Wally Richardson ’96 to talk about his memories of season openers; his expectations for the 2017 squad; END_OF_DOCUMENT_TOKEN_TO_BE_REPLACED 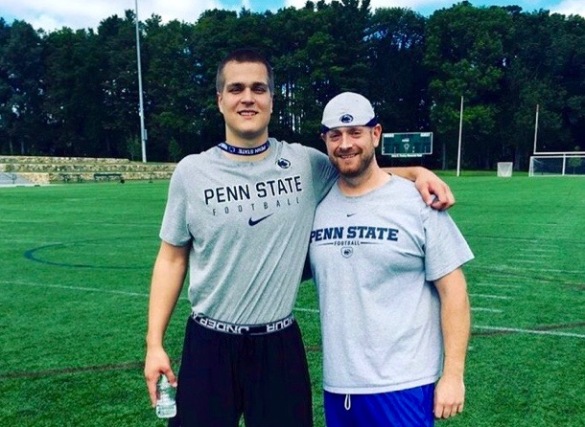 As a member of Penn State’s 2018 recruiting class and one of the best high school tight ends in the country, Pat Freiermuth (above, left) knows his audience. So when he tweeted recently encouraging his followers to check out a short documentary film, he made sure to mention that the film’s subject, Mike Stella, is a Penn Stater.

Stella ’05 (right) is a strength and conditioning coach who works with young athletes in the greater Boston area. That’s how he linked up with Freiermuth, but it turns out the blue-and-white connections here run even deeper than the bond between one alum and one soon-to-be Lion.

Stella didn’t suit up for the Nittany Lions, but as a former student manager for the team, he’s an integral part of the Penn State football family. That’s all the more true considering what he had to overcome to get there. END_OF_DOCUMENT_TOKEN_TO_BE_REPLACED