We were making our way to our seats in the Yankee Stadium press box early Saturday afternoon when we ran into Steve Kuebler and Pete Gergely. Our friend and College of Comm alumni relations director Mike Poorman pointed out that these two stadium regulars are also Penn Staters who work in game-day operations — specifically the complex, high-tech scoreboard set-up in the new version of this classic ballpark.

Steve also welcomed us (briefly) into the control room, where even 45 minutes before kickoff things were already getting busy. The shot above gives a sense of the tricked-out operation these guys run. (That’s Steve in the blue sweatshirt, third from right.) 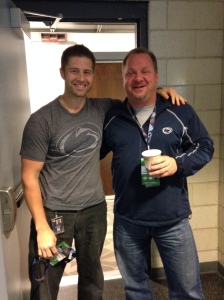 We also got Pete (right) and Steve to show off their school colors, which they were more than happy to do.

In a bit of perfect timing, our quick visit to the control room coincided with the on-field appearance of Sweeny Murti, the WFAN Radio Yankees beat reporter and proud alum, who offered a detailed pregame breakdown that played on the stadium video board. As he wrapped it up, Sweeny led the mostly blue-and-white crowd in a hearty “We Are…” chant. The response came back as loud as you’d expect. Between that response and the presence of so many Penn Staters for whom a day at Yankee Stadium is a day at the office, it’s no wonder we feel right at home.