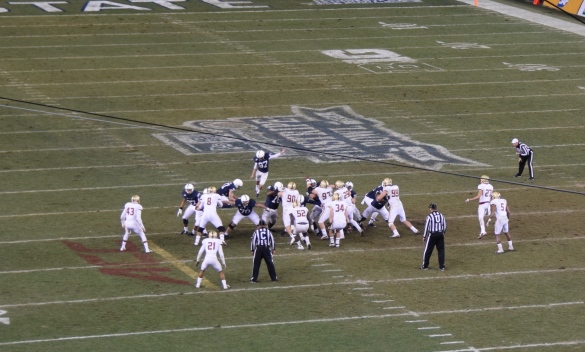 Current and former Lions worked on and off the field to maximize the impact of Sam Ficken’s final college kick. By John Patishnock ’05

Call it fate, or coincidence, or something else. Whatever the term, when Sam Ficken was assigned Derek Jeter’s locker for the Pinstripe Bowl, forces came together and produced something no one could have seen coming. Or perhaps it was karma coming back around to Ficken, the once-embattled kicker who transformed through tireless work into one of the most clutch players in the country.

Penn State fans know how the game ended: Ficken claimed an emotionally seismic victory for the Nittany Lions when he booted that extra point in the Pinstripe Bowl, the kick that preceded his jaunt across Yankee Stadium and sealed a 31-30 overtime victory against Boston College. Ficken’s extra point—a routine play that felt anything but—let loose a wave of bottled-up intensity that overtook the Bronx.

Then came the tweet by perhaps the most famous Yankee since Babe Ruth:

Derek Jeter launched The Players’ Tribune in October, shortly after his final game with the Yankees. The website features articles written by athletes, and Jeter acts as publisher. “It definitely took me by surprise, with the legendary player that he is, reaching out to a kid that isn’t near on his level,” Ficken says of the tweet. “Obviously, it was very cool. My friends were all texting me, saying congratulations. It was incredible. It’s a very cool memory that I’ll have for the rest of my life.”

The game book-ended a memorable 48 hours for Ficken, a finance major who’s interned with Merrill Lynch. He calls the experience of winning the game and ringing the bell on the New York Stock Exchange the day before as “the best two days of my life.”

Walking around the stadium, seeing the museum, and realizing how many legendary ballplayers have taken the field there and at the original Yankee Stadium struck Ficken, a Cubs fan who attended high school in northern Indiana. It was his first trip to Yankee Stadium, and he says with a laugh, “little bit different ends of the spectrum,” in comparing the Yankees and his boyhood team.

During pregame activities, Ficken had to be told twice he was using Jeter’s locker. The first time, he didn’t believe it. But it made sense, and was a perfect prelude considering how the game ended: with a walk-off, just like Jeter’s career did at Yankee Stadium a few months earlier.

Ficken may have used Jeter’s locker by happenstance, but the ensuing tweet was by design. Jim Ivler ’90 and his marketing associate Alex Stolls ’13 have contacts with The Players’ Tribune stemming from the site’s interest in John Urschel ’12, ’13g. An NFL agent with Sportstars Inc., Ivler represents both Ficken and Urschel, along with dozens of other players, including Penn Staters like Robbie Gould ’05 and Tamba Hali ’06.

Ivler and Stolls originally hoped they could connect with Jeter in-person for a piece on Ficken using his locker, but Jeter was on vacation. Still, the website contacted Jeter and gave him the heads-up; after the game ended, Jeter passed along word he’d write the tweet himself.

The congratulatory note jump-started a string of good news for Ficken, who announced in January that he had accepted an invitation to the NFL combine in Indianapolis. Ficken’s performance in the Pinstripe Bowl also earned him a spot on the AP All-Bowl Team, and he recently starred in the College Football All-Star Challenge, a made-for-television competition in Dallas, where he won the speed-kicking event. Ficken posted a great photo on his Instagram account, showing him attempting a field goal from the star at mid-field at AT&T Stadium, home of the Dallas Cowboys.

Never waking up from this dream #fromthestar

With the Pinstripe Bowl, Ficken was certainly in the right place at the right time, but he also came through. His 45-yard field goal with 20 seconds left in regulation tied the game, capping a 14-point comeback in the second half. Ivler and Stolls were also in the right place—or more accurately, knew the right people. “Once we knew he was in Jeter’s locker, we saw it an as opportunity,” Ivler says. “We went to work and it got publicized more than we ever could have imagined.

“I don’t think anyone could anticipate how well it would end and what a storybook ending it would be,” Ivler adds. “It’s our job as agents and representatives—you see an opportunity and you try to hop on it. Once we heard he had Jeter’s locker, it seemed like a natural to reach out to The Players’ Tribune.”

Jeter’s shout-out wasn’t the first time The Players’ Tribune prominently featured a Nittany Lion. Ivler and Stolls connected the website with Urschel, the former academic All-American lineman who’s written two columns for the site: “One in 600 Billion” and “The Transitive Property Is Real.” Both columns ran under the subhead: “Math Meets Football,” which also is Urschel’s Twitter handle.

Urschel possesses a distinctive voice. He can simplify complex concepts, and he talks to everyone with the same pleasant tone and looks for ways to connect people to math. It’s not unusual for people to ask him math questions on Twitter, and he’ll typically respond if he has time. Not out of obligation, but simply because he enjoys the topic.

Urschel has plenty off-the-field options, and he’s also helped out in his NFL community. He’s spoken to area students in Baltimore about math, and partnered with alumnus Jim Trexler ’82 on a scholarship program in Maryland. He leaves the business side of things to Ivler and Stolls, saying he’s blessed to have those two working on his behalf so he can focus on football, but writing for The Players’ Tribune wasn’t just an ordinary opportunity.

Urschel is able to balance his NFL career with his other passion of making math accessible to those interested, and his columns do exactly that with a blend of academia, humor, and athletics. “I was interested in writing for the website and it’s something I thought would be a great experience for me,” Urschel says. “The fact that it’s player-run is something I have a lot of respect for. That made this opportunity really stand out to me.”

Urschel says his columns are a good way to have a little fun, discussing mathematical concepts while connecting them to football. He’s heard through various channels that Jeter enjoys his columns, and The Captain isn’t the only one: His first piece, “One in 600 Billion,” garnered the longest-eyes-on-the-page metric for the website, which regularly publishes columns written by athletes known all over the world.

“We were definitely encouraged by that—especially on the Internet, where it’s so easy to get distracted—to see that readers were clicking on the article and reading it,” Stolls says. “They’re looking for new athletes to bring on, and they’re looking for guys like John, because he can take a complicated topic and make it easy to understand.”

“I think this is a point of view that’s underrepresented,” Urschel says of athletes’ first-person pieces. “Not to say this is any truer than the view that coaches may have, or that the media may have, but I think it’s a perspective that’s highly underrepresented. I think it’s a very good concept that Jeter is on to and I’m glad to be a part of it.”

Urschel says he isn’t sure if readers find his writing witty and engaging, or whether his articles take longer to read because of the math-heavy concepts involved; he half-jokingly says he’ll pretend it’s because of the former. Ivler says Urschel is a major part of The Players’ Tribune’s plans moving forward, and that the feedback they’ve received from The Players’ Tribune is overwhelmingly positive: “John is putting a different spin on the website than anybody else is.”

There’s also the possibility of Ficken writing for The Players’ Tribune, though he’s currently focusing on his future NFL career. He read Urschel’s first article, calling it “a great piece of work,” and likes the vibe and direction of the site. “I definitely think that that’s a very cool idea that he’s bringing to the table, having players give opinionated articles,” Ficken said. “That can definitely take off.”

Some athletes need the typical media interview to share their thoughts and explain their viewpoint, Stolls says, but Ficken and Urschel are sharp, articulate guys, and they can handle writing for a national platform and sharing their insight on whatever topics are important to them. That they’re hand-selected by someone like Jeter adds to the appreciation. Smart guys working with other smart guys: It makes sense.

“The real hook with this thing is it’s Derek Jeter’s first post-baseball venture; the fact that his name is attached to this, it’s given the website some cachet,” Ivler says. “To me, that’s the hook—the fact that they’re affiliating with the best brand in sports when it comes to athletes. Jeter, what he’s done on the field and off, that’s the type of image that we want for our guys.”