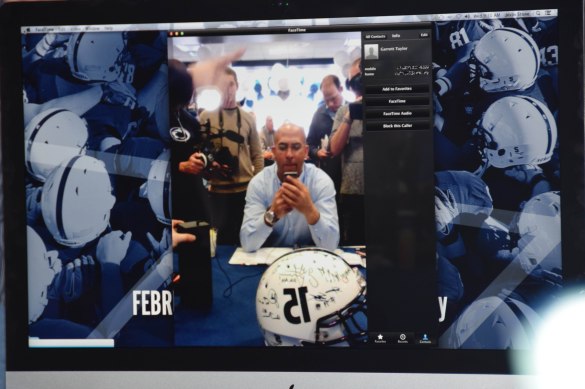 It’s all a bit meta, this Signing Day business.

That’s James Franklin, above, seen in the reflection of a computer monitor while dialing up a FaceTime call on his phone. On the other end of the line was Garrett Taylor (seen below on Franklin’s iPhone), one of the 25 future Nittany Lions who made their college choice official on Wednesday morning. Behind Franklin in the monitor’s reflection, you can get a sense of the crowd (and the balloons) crammed into the Lasch Building’s second-floor waiting area for the second Signing Day since Franklin’s arrival.

All of this, plus Wednesday night’s “Signature Event” at Rec Hall, is to mark the arrival of talented student-athletes who are the lifeblood of any successful program. And by all accounts, it’s a great bunch of recruits: a consensus top-15 class nationally, and unanimously considered the second-best class in the Big Ten. We’ll leave the talent evaluating to the experts, but here are a few other frozen moments from Wednesday morning’s celebration of the incoming class of 2015. 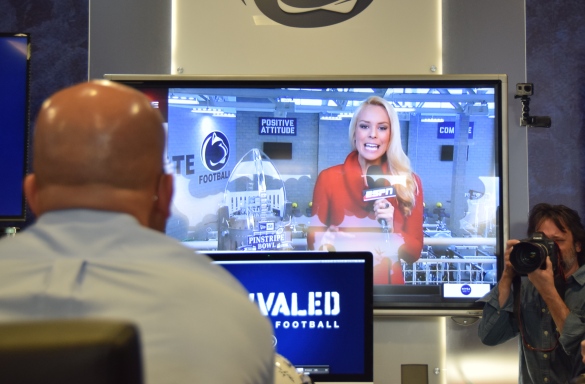 Yes, another screen: This time it’s Franklin watching ESPN’s Britt McHenry doing a standup from the balcony of the Lasch Building weight room. Twenty minutes later, Franklin drafted McHenry to add a recruits’ name to the “draft board,” but only after she agreed to put on a blue jacket. As the @PennStateFball account tweeted, the event had a strict policy of #NoRedAllowed.

Like last year, Franklin enlisted some of his fellow Penn State coaches to help with announcing the recruits as their signed letters of intent came in. Cael Sanderson, coach of the four-time defending NCAA champion wrestling team, was among those who did the honors. 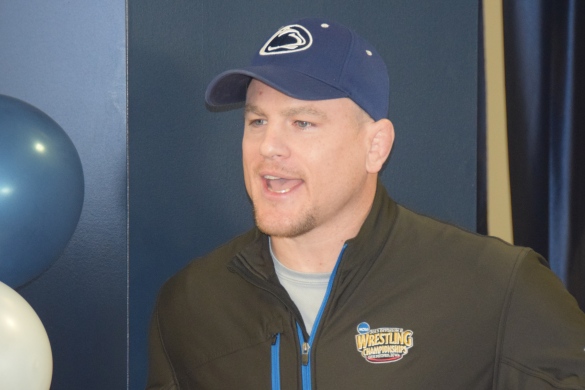 As each player was introduced and their name added to the draft board, highlights from their high school games played on the flatscreen TVs. Linebacker Jake Cooper looked pretty ferocious on film, but during his brief FaceTime call with Franklin, he looked every bit the happy, exuberant kid.

This last shot is pulled from the Twitter feed of Steven Gonzalez, a 6-4, 320-pound offensive lineman from Union City, N.J. At his announcement Wednesday at Union City HS, Gonzalez left an empty chair next to his own for his late father, who died of a heart attack in the fall of 2013.

Much is made of the circus around National Signing Day, and understandably so. But for all it means to coaches and fans, the chance to secure a scholarship to play football at a place like Penn State is monumental for these young men and their families. For each of these new Lions, and Gonzalez especially, it’s a moment they won’t soon forget.