When we caught up with Tim Shaw in December, he was in Boston to fulfill a specific—and rather unusual—task.

“I’m giving them my skin cells,” Shaw ’06 said. “I was at the ALS Therapy Development Institute, where they do this awesome ALS research. I’m taking part in a big project: They’re going to grow my cell, and it’ll be tested against 50,000 drugs.”

To hear the excitement in Shaw’s voice as he explained his role in the project was to hear a man enthused at the chance to make a difference.

It’s an easy cliche, but for a guy who made a living in seven NFL seasons as an unheralded but invaluable special teams standout, and who regularly spent his off-season making mission trips to places like Costa Rica and Haiti, it seems entirely apt. He’s the sort of guy who will do anything, even—especially—the hard thing, to help the cause. With the build-up to Sunday’s Super Bowl subjecting the sports world to two weeks of fake controversies and mindless noise, it seems a good time to consider a man of quiet substance, the good he’s doing, and the good being done in his name.

Shaw’s causes are many, and among them, now, is ALS. He went public with his diagnosis last summer, and not long after, he traveled to rural Brazil with his father and others to dig wells in an area without access to clean water. A little more than a year ago, he lost his “best friend, brother, teammate, roommate and warrior” Brandon Ream ’06 to cancer, and he’s been a proud and active representative of Team Ream ever since. That trip to Boston late last year was consistent with Shaw’s internal mandate to do something, even if the competing paces of the disease and the search for treatment and a cure mean his efforts are likely to benefit others more than himself.

And that’s why Paul Omekanda ’06 felt that irrepressible need to act. Omekanda and Shaw (pictured at the top of the column) both came to Penn State after standout high school careers in Michigan—Omekanda in soccer, Shaw on the football field. Through their shared background, shared faith, and mutual friends, they eventually became tight in college. “I always like to remind him,” Omekanda says now, “that Paul and Timothy in the Bible did hang out together.”

Shaw will be the best man when Omekanda gets married in 2016, and it was that target—”wanting him to be there, alive and of health,” Omekanda says—that led him to found the nonprofit Best Man Tim, which is working to raise money and awareness of ALS research. The name, of course, is inspired by Shaw’s role in his friend’s upcoming wedding, but by something more: “He’s the best, man,” Omekanda says. “He’s my best man, and he’s also the best man for the job. And it isn’t an easy job right now.”

Best Man Tim began modestly: “He basically started with some T-shirts, and the dream kind of grew as it went,” Shaw says. “It really just came from a friend wanting to help, but not knowing what to do. I think a lot of people fall in that situation. Most people just say, ‘Tim, if you need anything, let me know.’ Well, I don’t need anything. But he just said, ‘I want to do this for you, raise money in your honor.’ I was never the kind of guy that wanted a foundation, but I said, OK, let’s do it. He had that desire, and he went and did it.”

Connecting with fellow lettermen at the Ohio State game.

Omekanda is working to expand Best Man Tim’s reach and profile, particularly at his alma mater. “The goal is that this will be Tim’s legacy at Penn State,” he says. It started with Omekanda reaching out to coaches and former student-athletes he knew during his own undergraduate days; in October, the athletic department announced that Penn State was partnering with Best Man Tim for a united front in the fight. Shaw was back on the Beaver Stadium sideline later that month for the Ohio State game.

Shaw was back on campus again earlier this month for Team Ream Day, an annual fundraiser and celebration of Brandon Ream’s life at a Nittany Lion basketball game. He was honored at halftime as the Team Ream “Fighter of the Year.” Typically, he downplayed his role as “just showing up and signing autographs,” but in the next breath, he acknowledged that showing up—doing something—had its own value and power. 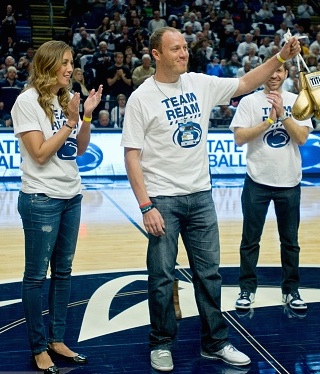 Team Ream’s “Fighter of the Year.”

“I think that’s the overarching point that I want people to know: If you’re not reaching out for somebody, if you’re not doing something for somebody else, you’re missing out,” he says. “That’s what’s fulfilling. What’s important is that I’m there for his wife, there for his family. It’s those types of things that drive me.”

It’s that mindset that ensures Shaw is creating what is sure to be a lasting legacy. And it’s a legacy he wastes no time pondering.

“I don’t want this to be a thing where, in 10 years, when there are many drugs and many great things going on for ALS—when people with ALS actually have hope—I don’t want Penn State to do a Tim Shaw fundraiser. This isn’t about me,” he says. “I want it to be about students and people at Penn State coming together and really making an impact on this disease, like they do every year with THON. Penn State’s such a powerful machine, as far as impact, and I know that awareness will get out there.”

He adds, “Best Man Tim is just getting people focused. Everybody says they want to get something done. Paul has gone out and done something.”