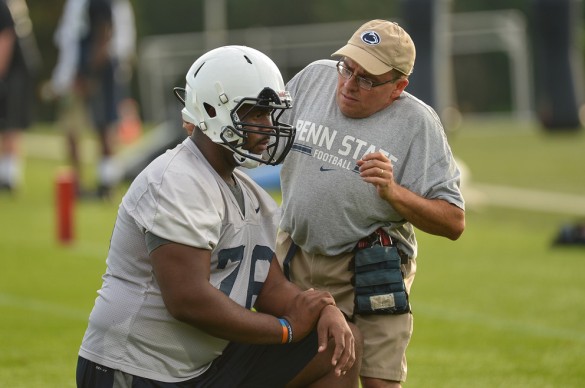 Last fall, he went to his first tailgate. Brad Caldwell was back in town for the Ohio State game, and there he was in the Medlar Field parking lot, soaking up the pregame scene. “Thirty-one years, my first tailgate!” Caldwell says now, the enthusiasm in his voice familiar to anyone who knows him.

Caldwell’s schedule for the previous 31 years didn’t allow much time for tailgating. From the time he joined the program as a student manager in 1983, Brad “Spider” Caldwell was an integral part of the Penn State football family. Last May, he retired from his long-held role as football equipment and facilities manager and moved with his wife, Karen, to their small vacation home in Vermont. But after back-to-back health scares last summer, the steady pull of the community he’d been a part for so long brought him back to Happy Valley.

In January, Spider Caldwell started his new job as facilities coordinator at Beaver Stadium. He’ll no longer be the guy handling the Nittany Lions’ on-field equipment needs, but in body and soul, he’s home.

“Literally, my first day here, I’m sitting in my office looking out at Mount Nittany, and I’m in tears,” he says, catching up by phone in his second week back on campus. “It’s been so much fun reconnecting with everybody. I feel great, and I’m having a blast. It’s great to be back.”

Spider’s time away from Penn State was short but daunting. In Vermont, he had taken a job at Fair Haven Union High School, a small public school not far from his and Karen’s home, where he would oversee athletics and student activities. He’d been on the job just two weeks last June when he and Karen schedule a long weekend back in Central PA to retrieve some things they hadn’t had a chance to move. It was a Thursday night. “We’re sitting around the camp fire, and I had an uncomfortable feeling between my shoulder blades,” he recalls. The pain wasn’t bad, but he woke up in the middle of the middle of the night feeling nauseous, and by Friday morning, he didn’t think he was up to making the trip. Karen said she’d do the driving. It’s probably good that she did.

They made the trip that Friday and slept at their home in Port Matilda, which they hadn’t yet put it up for sale. Spider felt exhausted, but he says most of the discomfort had passed. But when he woke up Saturday morning, “I was out of breath, and I could hardly make it out of bed.” Karen rushed him to the emergency room at Mount Nittany Hospital, where tests confirmed a clogged blood vessel had led to a silent heart attack. The good news was that he was stable; his doctors—including former Nittany Lion gymnast James Gerardo ’91—decided to keep him at the hospital until Monday, when they scheduled a cardiac catheterization.

That Monday, Spider underwent the operation. “I remember waking up from the procedure, and Dr. Gerardo is saying, ‘Good news.’ And I’m like, ‘Doc, I can’t see you.’ I had a blind spot.” Further tests revealed the procedure had loosened some plaque in an artery; Spider had suffered a minor stroke. But, as with the heart attack, Spider was relatively lucky. Six months later, he still has minor vision loss on his right side, but doctors are optimistic he might regain his full vision within two years.

But back to last summer: Spider and Karen returned to Vermont, where he took six weeks off from work at the high school while recovering. During that time, he began to have second thoughts about whether he was willing and able to get caught up in a demanding new job. Eventually, he resigned. “I felt terrible about leaving them out to dry, but they were very understanding,” he says.

He ended up taking a job at Orvis, the Vermont-based outdoor sports retailer whose flagship store in Manchester was just 10 miles from his house. “I got a part-time, seasonal job there, and it was going fine” he says. “But whenever someone would come in with a college sweatshirt on, I found myself talking about football. Eventually some of the workers started talking about it, ‘He used to work at Penn State,’ or Penn State alumni would come in and sometimes recognize me.” He found his mind wandering to what was still, in so many ways, home.

The Caldwells were back on campus in October, for the Buckeyes and a first-ever tailgate with his friend (and Nittany Lion letterman) Dan Delligatti ’87. It was a short walk from their spot in the Medlar Field lot to the lettermen’s entrance at the stadium, but when Spider decided to make the trek, it took him much longer than planned. “So many people were coming up to me, saying hello, thanking me for my service to Penn State—it was humbling, and it was overwhelming,” he says. “It made me think how much I really miss my friends, my coworkers, the atmosphere.” Karen saw all of it; she was enjoying life in Vermont, but in the scrum that surrounded them as they crossed Curtin Road that Saturday—and later, when a number of players on last year’s team lined up to greet him in the tunnel on their way back from pregame warmups—she saw what it meant to her husband. “She was like, ‘You’ve gotta come back. This is where you belong.'”

Spider had already applied for the new facilities coordinator position, which was created to help former Nittany Lion captain Bob White ’86, ’96g run the show at Beaver Stadium. White’s primary responsibility is managing the stadium club seats and suites, but as the building has become ever more popular as a destination for weddings, receptions, and other events, the demands were becoming too much for one position. The ideal candidate for the new job would be a people person who knew the building inside and out. In other words, it was the perfect gig for Spider Caldwell.

“I love meeting people, and I loved that part of my of my job as equipment manager,” he says. “I loved leading tours here and at Lasch, and a lot of this is job is development related, working with donors and alumni. And of course, I know the stadium like the back of my hand. So hopefully I can relieve Bobby, and it’s not so much to overwhelm me.”

It’s early, but so far, Spider says this feels like the perfect gig: less of a grind than the long hours required during the season (and beyond) of his days running the Lasch equipment room, but still enough to keep him in the mix. He plans to reconnect soon with James Franklin—”I just want to help, whether it’s to meet a recruit or talk to a parent,” he says—and with Jay Takach, who was named the Lions’ new equipment manager last August, in case he can ever lend a hand.

He knows that’s not his gig anymore, and he’s okay with it. Well, mostly. “I was on the sideline for the Ohio State game, and it was weird—I missed my tool pouch,” he says. “I saw something that needed fixing, and I wanted to run over and fix it. I missed fixing helmets, sewing jerseys up with a shoestring.”

He’s not sure where he’ll be on game days this fall, but he figures he’ll spend at least part of the time in the suites and club seats, mingling and solving any problems that might need to be solved. But if there’s a chance to get down on the field at some point … well, let’s just say Spider, as always, will be ready. “I’m in my office right now, and I’m looking right at my tool pouch,” he says with a laugh. “I’m keeping it close, just in case.”

12 thoughts on “Spider Caldwell, Back Where He Belongs”