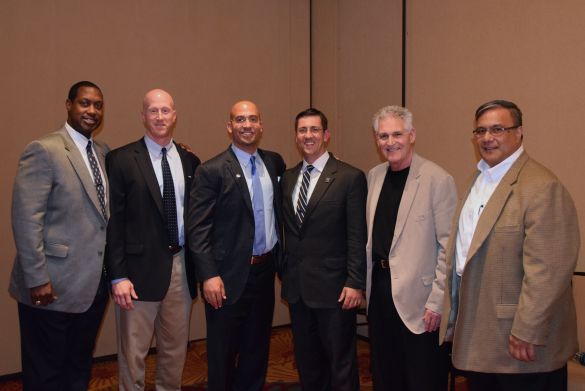 That’s five different decades of Penn State football in the photo you see above, and one great reminder of what’s become an annual highlight of the Coaches Caravan.

Tuesday night in Lancaster gave James Franklin another chance to connect with Penn State’s football heritage. As he did at various Caravan stops last year, Franklin met before the event with a handful of former Nittany Lion players. You’ve got guys from the ’90s—that’s Football Letterman’s Club director Wally Richardson and former teammate Ryan Grube on the left. To Franklin’s right are representatives of the 2000s (Scott Shirley), ’60s (Dave McNaughton), and ’80s (Ao Polamalu).

It’s a treat watching Franklin interact with these guys, and they seem to appreciate his message: Come back to games. Encourage your teammates to do the same. Know that we value your contributions. And perhaps more important, understand that you’ve got an ownership stake in Penn State football. “It’s not my program,” Franklin told these former Lions. “It’s your program.”