Even though we’re about a month removed from an incredibly successful (and enjoyable) season, we’re still amazed at how Penn State football unites our alumni network.

We have the privilege of seeing firsthand how much time and energy our alumni volunteers put forth during the football season, organizing events each weekend across the country.

Of course, each Saturday is a lot of fun. Additionally, watch parties serve as an opportunity to leverage the shared passion that Penn State alumni have for football into something that goes beyond the field.

Ridge Riley understood this better than any Penn Stater.

Riley faithfully served the Alumni Association for decades, ending each issue of The Football Letter with, “Faithfully, your correspondent.” He understood his audience and spotlighted what truly matters to Penn Staters, always providing insight that alumni couldn’t find anywhere else.

That’s why we’ll occasionally pop downstairs at the Hintz Family Alumni Center and peruse his book, “Road to Number One.” There are three copies in Robb Hall, two personally donated by the Riley family.

The pages and book covers are worn, a testament to how often alumni and friends will stop by and glance through the book, learning Riley’s perspective as he chronicled the rise of Penn State football from an eastern power into a national force.

Joe Paterno wrote the forward, a thoughtful reflection that included he was the last person to speak with Riley. During one of their many talks, in January 1976, Riley asked Paterno, “Where do we stand? Where are we right now?”

Both an incredibly simple and complex question.

Those were Riley’s last words (he died shortly after from a heart attack), and they’re just as timely now as in 1976. Coming off another 11-win season and NY6 bowl game, James Franklin and the Nittany Lions are primed for their first appearance in the College Football Playoff.

That isn’t just the hope, as it certainly seems to be the expectation for the team heading into 2020. Accomplish that, and the program’s third national title is also within reach.

So, imagine someone posed Riley’s question to you, heading into spring practice in a couple months: “Where do we stand? Where are we right now?”

We’re heading to Texas in a few days for the Goodyear Cotton Bowl Classic, where Penn State will vie for its third 11-win season in four years. It’s been a while since the Nittany Lions have achieved that level of success, and with James Franklin recently signing a contract extension and bringing in another Top-15 recruiting class, this level of success very well could continue.

As Franklin often says, it’s a group effort, including alumni, fans, and lettermen, the work that goes on behind the scenes by the football coaches and support staff, and the incredible level of dedication that’s put forth by our student-athletes.

As usual, it’s an exciting time for the program and the passionate fan base that supports the Nittany Lions, and that level of bold enthusiasm will be on display this week in Dallas and the surrounding area.

Saturday will be the first time that The Football Letter stalwarts John Black ’62 and Steve Manuel ’82, ’92g will cover the Cotton Bowl. Ridge Riley detailed the last time Penn State played in the Cotton Bowl in 1975, in the next-to-last year that Riley oversaw the publication. We’ve uncovered a few Associated Press photos from the victory over Baylor that year; one is included in this post, and we’ll share a few others this week on our social channels.

If you’re traveling into town for the game, you’re invited to attend a number of events that the Alumni Association is hosting, including a volunteer service project. You can find complete details on Penn State News.

Notably, the morning of the game, we’re hosting the official Cotton Bowl pep rally, from 8:30-9:00 a.m. It’ll take place right by AT&T Stadium, within the Goodyear Huddle Up Fan Fest located in the Miller Lite (West) Plaza. The pep rally will feature the Blue Band, Penn State Cheerleaders, the Nittany Lions, the Lionettes, and special guests.

We hope to see you there, and we look forward to meeting alumni and fans during our trip. We’ll have additional content on the blog later this week, including coverage of our events. Tag the Alumni Association and The Football Letter Twitter accounts, and let us know if you’re in town or if you see a cool photo or interesting story idea. 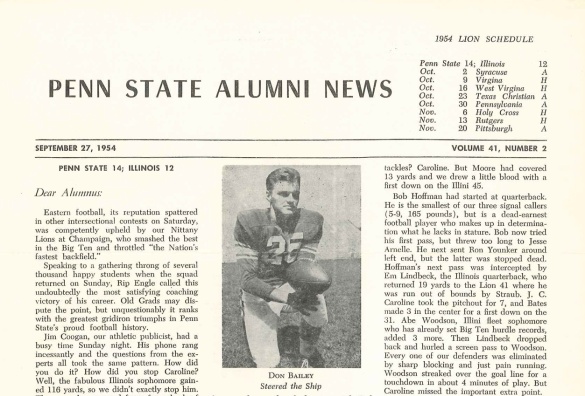 “When you win an important game from Ohio State in Columbus … the inclination is to be polite about the victory and magnanimous with the vanquished. But honestly END_OF_DOCUMENT_TOKEN_TO_BE_REPLACED 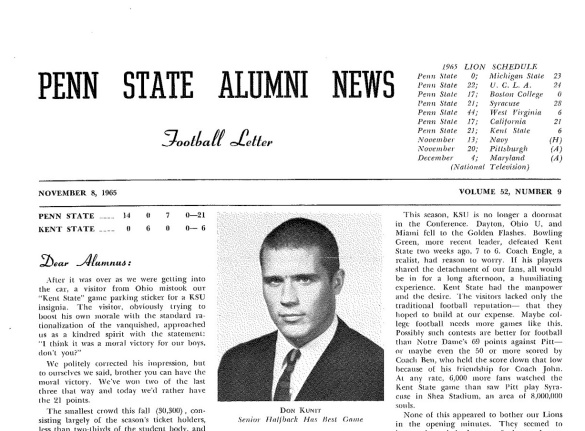 “My goodness, it’s our game of the century.”

END_OF_DOCUMENT_TOKEN_TO_BE_REPLACED

A scoreless tie in 1922 marked the first of 70 gridiron meetings between Penn State and Syracuse—only the Pitt Panthers have lined up opposite the Nittany Lions more often. The 71st meeting between the old foes also marks the start of the 2013 season—and gives us a welcome excuse to dig through the Football Letter archives.