It’s impossible to tell the story of Penn State football without mentioning the Fiesta Bowl, and the same is true of the 2017 season.

In his edition of The Football Letter recapping Penn State’s 35-28 victory over Washington in the Nittany Lions’ latest appearance in the prestigious game, John Black laid out how closely linked the two are, and how Penn State helped the bowl elevate to its elite status.

The folks in Phoenix love Penn State, because it always brings planeloads of fans and a big television audience. And in their first four appearances between 1977 and 1986, the Nittany Lions provided great impetus to the bowl’s rapid rise from a regional affair to the Big Five of the national bowls.

Penn State loves the Fiesta, because the Lions have compiled their best record in any of the postseason classics there and the players are always shown a great time.

State’s fans love escaping the northeast winter by going to Arizona, because they have always found plenty of sunshine, delightfully warm temperatures, excellent hospitality and fun things to do.

The most fun, of course, was watching their Lions cage three Heisman Trophy winners—Marcus Allen of USC in 1982, Vinnie Testaverde of Miami in 1987 and Ricky Williams of Texas in 1997.

And who will ever forget the Lions’ upset of Miami to win the national championship in the 1987 Duel in the Desert, witnessed by 70 million television viewers in addition to the sellout crowd in Sun Devil Stadium?

Penn State amassed a bowl-record 545 yards of total offense against Washington in late December 2017, while rolling to its second straight 11-win season, its 29th bowl victory, and its second postseason decision over the Huskies. Penn State beat Washington, 13–10, in the 1983 Aloha Bowl in Hawaii.

The Nittany Lions’ entered the game ranked ninth with the Huskies three spots behind in 12th, and Penn State beat the team that edged them out the previous year in the College Football Playoff. The 2017 team was part of quite possibly the most successful four-year run for Penn State in the Big Ten era, as the team won 40 games in four years. Even their losses were close, as the Nittany Lions’ two setbacks in 2017 were by a combined four points to Ohio State and Michigan State.

The wins, meanwhile, came in bunches and with plenty of flair.

Penn State outscored its three non-conference opponents (Akron, Pitt, Georgia State), by a combined score of 141-14. The conference open was memorable for a different reason, as Trace McSorley found Juwan Johnson in the back of the end-zone for a walk-off win at Kinnick Stadium, one of the toughest venues in the Big Ten.

Saquon Barkley — you may remember him? — put together an epic performance of more than 300 yards from scrimmage (211 rush/94 receiving), befuddling and mesmerizing the Hawkeye defense with leaps, stutter steps, and moves that can only be described as Barkley-esque.

In total, Penn State scored at least 30 points in all but two of their games, and also produced 40-plus points six times, 50-plus points four times, and 60-plus points once.

Many of the stars from that team are now on NFL rosters, and it’s entirely possible that a decade from now, one or two will be future Hall of Famers. Fans can look back further on the 2017 season by logging in below to read The Football Letter issues from that season, as well as view photo galleries from the season on our Flickr page. 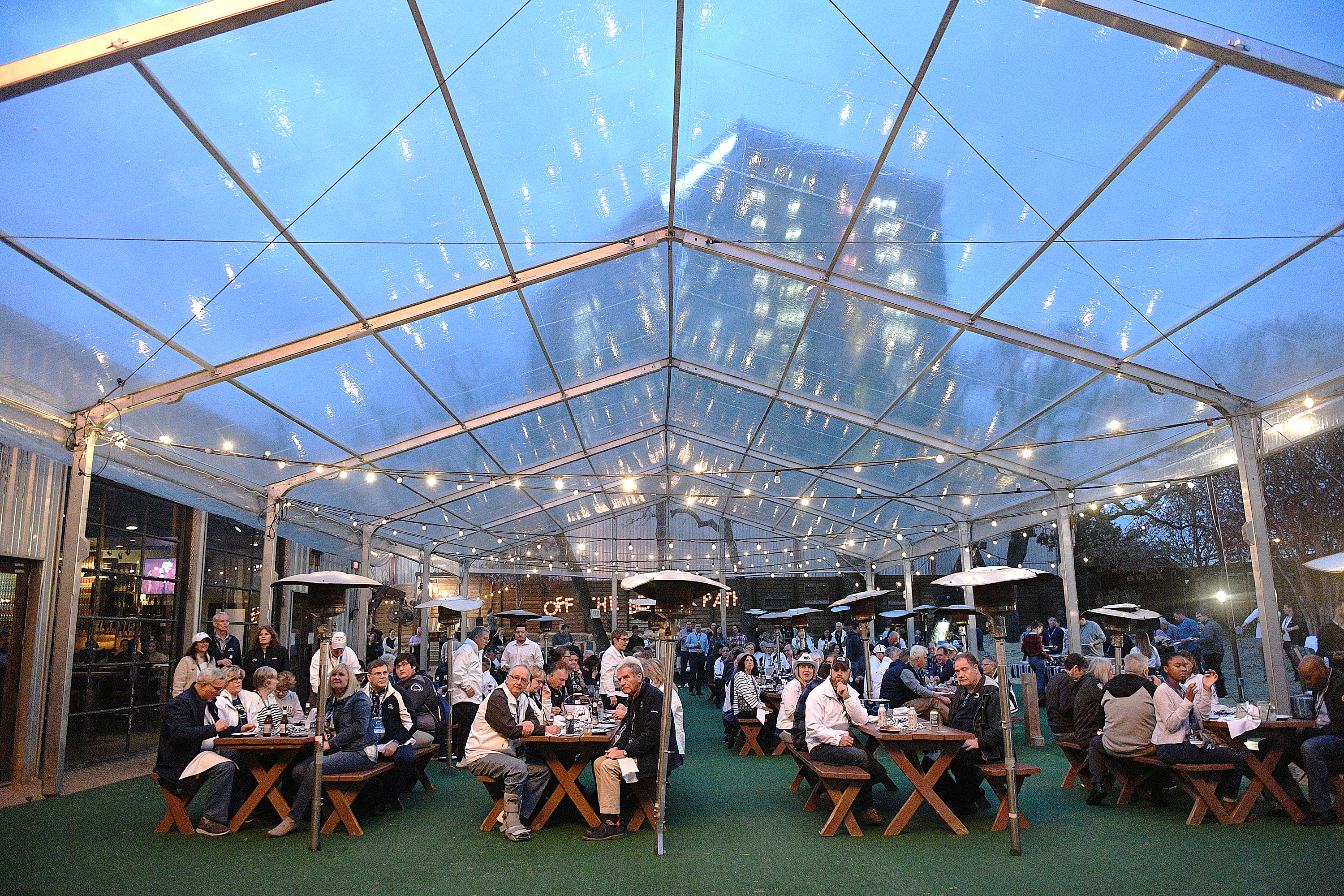 Alumni and fans kicked off the Penn State Bowl Tour with a reception at The Rustic, in Dallas. The Nittany Lion, Penn State Cheerleaders, Lionettes, and special guests welcomed Penn Staters, who enjoyed a relaxing evening ahead of the Cotton Bowl. Photo credit: The Football Letter/Steve Manuel.

Not that we’re surprised (we’re not).

The chances are incredibly high that you’ll have a good time anytime you gather with a bunch of Penn Staters, and that was exactly the scene that played out this evening about 15 miles from AT&T Stadium, site of this year’s Cotton Bowl. The Penn State Bowl Tour kicked off with a welcome reception, and the ambience was just what folks were craving.

A few hundred Nittany Lion supporters gathered tonight at The Rustic, a down-home restaurant that offered what most folks are craving after a long day of traveling: good food, cold drinks, memorable views, and most importantly, an opportunity to gather with fellow Penn Staters and enjoy performances from the Nittany Lion, Penn State Cheerleaders, and Lionettes. 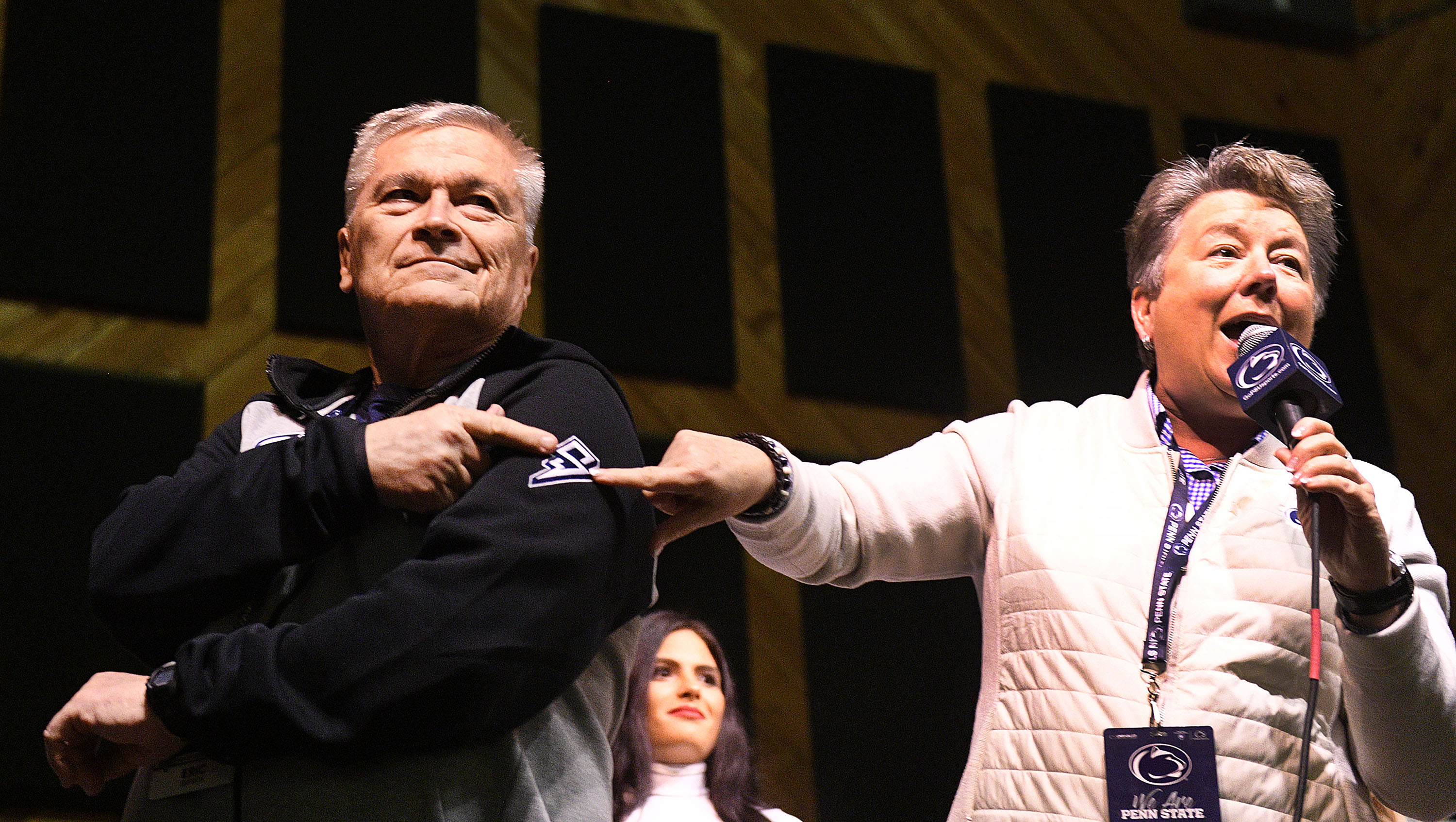 Penn State President Eric Barron and Director of Athletics Sandy Barbour also attended, sharing insight on how the University and athletic department strive to be one of the leading educational institutions in the nation.

Both Barron and Barbour stressed how our student-athletes are excelling in the classroom while surpassing the competition in the athletic arena, with Barbour touting the student-athletes’ upcoming Academic Progress Rate (APR). You can learn more about the APR on the NCAA website.

Alumni Association CEO Paul Clifford and President Randy Houston, meanwhile, welcomed travelers and spoke to the power that our alumni network flexes when thousands alumni travel every year to the bowl game. You can check out our archived live stream of Clifford and Houston on our Facebook page, in addition to a host of videos on our Twitter feed.

Stay tuned all week, as we’ll update the blog and our social channels and share how Penn Staters are bringing the roar to Texas.

It was one of those Twitter moments that even folks who spend a lot of time on Twitter might have missed, a brief conversation between two guys 20-some years apart, but with more than a little in common.

The first tweet came from Ki-Jana Carter ’95, a name that anyone reading this blog should be familiar with. The second came from Saquon Barkley, a young man Penn State fans—and a couple of unfortunate defenses—have learned all about the past two weeks. If one reminds you a bit of the other, you’re probably not alone. END_OF_DOCUMENT_TOKEN_TO_BE_REPLACED