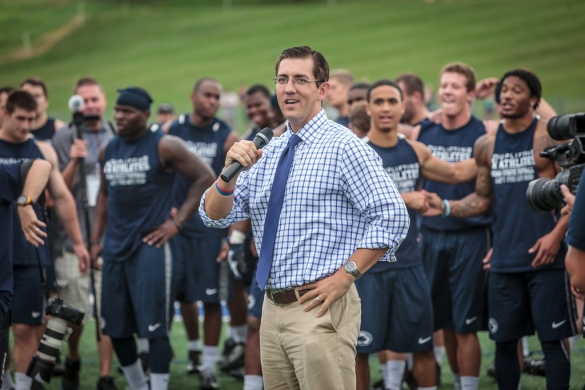 Scott Shirley never imagined how far this thing might go.

This was 11 years ago, before Uplifting Athletes was a nationwide charity responsible for raising millions of dollars and immeasurable awareness in the fight against rare diseases, and Shirley ’03, ’04g was nearing the end of his time as a consummate student-athlete. A wide receiver for the Nittany Lions and a top student in the College of Engineering, he was excelling despite the burden he and his family shared: his father’s recent diagnosis with kidney cancer. For six months, Scott and his family struggled not only to come to terms with Don Shirley’s illness, but with the medical establishment’s seeming lack of interest in providing any answers—or hope.

“In the fall of 2002, he was given six months to live, and that didn’t really add up to me. It didn’t make sense,” Scott Shirley says now. “This was a really healthy guy, the picture of a guy who beats cancer. But everyone kept telling us the same thing: ‘There’s nothing we can do.'”

Eventually, Shirley got some explanations for this apparent apathy: That every type of cancer is different; that some, like kidney cancer, don’t respond well to the most common forms of treatment; and that there are thousands of diseases—kidney cancer among them—that are too rare to draw substantial attention from researchers. There’s nothing we can do. So it was that Shirley came back to his apartment one night in early 2003, looking and feeling deflated. His teammate and roommate, Damone Jones ’04, saw his friend and made the only suggestion he could: “Why don’t we do something?”

A seed was planted, from which Uplifting Athletes would soon bloom.

With the help of teammate Dave Costlow ’03, ’04g, Shirley and Jones organized the first Lift for Life in the summer of 2003; they raised $13,000 for the Kidney Cancer Association. This summer, the Penn State football team will hold its 12th annual Life for Life event, one of dozens of events hosted each each year by the 20 Uplifting Athletes chapters around country. With UA’s annual Gridiron Gala set for Saturday, March 8, in Harrisburg, we spoke with Shirley—who left his engineering job in 2007 to lead Uplifting Athletes full time—to talk about the organization’s unlikely growth and its remarkable impact on rare disease awareness and research.

TFL: You started Uplifting Athletes as a reaction to your father’s illness. Did you ever imagine you could impact so many people?

Shirley: Even at that point, I wasn’t doing it because I thought we could help my dad directly. We were donating money to research, and that’s such a long process. We just really felt that as college football players, we had this spotlight we could use to help a community get the attention it deserves. That was really our goal with the first Lift for Life; it wasn’t about my dad, it was what we learned from his experience.

TFL: How did that first Lift for Life event evolve into the national Uplifting Athletes organization you have now?

Shirley: We were really happy with the first year. We planned it like a small business, the team was really engaged, fans came out, we had a lot of media coverage. We raised $13,000, and when we did it again the next year, we raised $38,000. In the shadows of Dance Marathon, that doesn’t really sound like a lot of money, but we felt like, for a couple of college kids, that’s a pretty significant contribution.

Anyway, Dave and I were writing out thank-you notes one night, and we decided we should go out to Chicago at some point and meet the people at the Kidney Cancer Association. It was about 9 at night on a Thursday, and we looked at our calendars and realized the only time we could do it was that weekend. We called them the next day and they said, “You’re our biggest private donor—you’re always welcome.” They had a staff of three, and they were having their biggest patient conference that same weekend.

So we rented a car, went home and did our laundry, and the three of us—Carrie Konosky ’05, ’09g, who was on the dance team at the time and was helping us out, came too—drove overnight to Chicago. When we were about an hour away, they called to see where we were; when we told them, they said, “Great, our keynote speaker just cancelled. Can you fill in?” Of course, we obliged. We pulled into a rest stop, changed clothes, and got to Chicago. When we pulled up to the hotel, they valeted our car and pulled us right up on stage.

Here was a room full of people who had lived what my family and I had lived, constantly being told that no one could do anything for them. We spoke for five or ten minutes, and we were interrupted three times by standing ovations. Here’s a couple of college kids who drove halfway across the country just to hand-deliver a $50,000 check and say, “You might feel alone, but you’re not. We’ve got your back.” We just felt that, if nothing else, we can inspire people with hope. That was a life-changing moment. From that point on, it felt almost like an obligation.

TFL: That’s an amazing story, and even then you couldn’t have known how far your idea would spread. What happened to make UA a national presence with chapters at programs around the country?

Shirley: I graduated and moved to D.C. to work, and my dad ended up passing away in 2005. One month after he passed, the first new kidney cancer treatment came to market. Since then, eight new treatments have come to market, and the outlook for kidney cancer patients is much different than it was.

Anyway, I ended up leaving my job as an engineer in 2007 to run Uplifting Athletes full time. The idea was to franchise what we’d done at Penn State, with each chapter adopting one of the rare diseases that had had an impact on them. It’s been really cool. We’ve started 20 chapters, around the country, including half the Big Ten and half the ACC. Of course, Penn State is where it started, and it’s the biggest chapter. They’ve raised more than $800,000 so far, and they’re probably going to end up breaking the $1 million total this year.

TFL: There are some great stories at some of your other chapters, as well.

Shirley: After Boston College linebacker Mark Herzlich was diagnosed with Ewing’s sarcoma, they made a significant impact on that disease (the BC chapter raised $121,000 toward Ewing’s sarcoma research in its first year), and Mark went on to win the Super Bowl with the New York Giants. There’s the little boy in Nebraska who scored the touchdown in their spring game last year. That was done through the Nebraska chapter of Uplifting Athletes—it was their idea, to raise awareness of brain cancer. In a 24-month period, we’ve had a $3 million impact on that disease.

And then Kevin Haplea, who transferred from Penn State to Florida State, founded the chapter down there. They actually raised money during the national championship game—fans donated to Fanconi Anemia research every time they scored a touchdown, in honor of Jimbo Fisher’s son. So that’s three great examples of how we’ve been able to spread the values of success with honor and really inspire people around the country.

TFL: You obviously started all this while Joe Paterno was still coaching. What was his reaction when you first pitched Lift for Life?

Shirley: Joe was 100 percent on board. He was sort of quietly supportive, because he didn’t want to overshadow it. He respected that this was something we wanted to do ourselves. We had a great relationship with him. I’ve always said, it’s because of the type of student-athlete that wants to come to Penn State that Dave, Damone and I were in that locker room together, and you can credit Joe for building a program that was attractive to the three of us.

And I should add, when I left my job in D.C. to do Uplifting Athletes full-time, Sue reviewed our business plan for us, too.

TFL: Based on Lift for Life’s continued success, it doesn’t look like the coaching transitions of the past couple of years have slowed you guys down at all.

Shirley: Luckily, working with multiple schools, I’ve dealt with coaching changes a lot. With Bill O’Brien, the magnitude of the situation when he got here put everyone on edge, but the first time I met him, he immediately gave me peace of mind. Not long after Joe’s funeral, I was at the Lasch Building, and Bryan Scott ’03, who used to be my roommate, asked if I wanted to meet Bill. I wasn’t going to just barge in, but O’Brien knew B-Scott because he played for the Buffalo Bills.

At the time, Bill was breaking down game film for the Super Bowl. I was just a fly on the wall, and I could see how brilliant he is as a coach. Then he looks over and says, basically, “Who are you?” I introduced myself, and as we talked, he started to ask us, “Why Penn State? What part of Penn State do you want to pass on to your kids in 20 years?” You could tell he wasn’t wasting a moment, and in that conversation, I was able to tell him about what we did with Lift for Life, how proud I was of Penn State for the autonomy they gave us. He basically said, “You have my full support. Just send me a note and let me know what you need.”

I actually know Coach Franklin from when he was at Maryland, another one of our chapters. Same with Dwight Galt. I haven’t had a chance to connect with him since he’s been hired, but I’m excited to reconnect when the time is right.

TFL: You mention that autonomy, and that’s really why, certainly at Penn State, you guys have been able to succeed through all these changes. It’s the players who run the show.

Shirley: We’ve been very lucky to have a great group of guys. It’s no surprise for people who know Penn State, because that’s the type of player who chooses to come to Penn State. Every year when the chapter president graduates, my mom asks, “Who’s going to keep it going?” But someone always steps up. Ben Kline is the new chapter president, and he’s so sharp. He’s got it figured out. We just lost Eric Shrive ’13 (below), who raised more than $100,000 personally before he graduated, so you wonder who’s going to fill those shoes. And then Ben Kline steps up, charting his own course, trying to get even more guys on the team involved.

TFL: At this point, it really seems to create and build on its own momentum.

Shirley: I think that’s been really fundamental to the longevity of it. Like I said, it was never really about my dad, so there was no motivation lost when he passed away. I think what attracted all these other chapters is the same thing that motivated us. It’s kind of a purpose-driven mentality, which is really cool to see: We’re in this position, we have this spotlight, and we have the desire to use it for good.

The annual Gridiron Gala, one of Uplifting Athletes’ biggest events, is set for Saturday, March 8, at the State Museum in Harrisburg. Derrick Williams ’08, Wally Richardson ’96, ’03g, Jordan Hill ’13, Deryck Toles ’03, and Brett Brackett ’09 are among the former Nittany Lions expected to attend. Click here to purchase tickets and support a great cause.